By Yulia Goldenberg and Noam Tractinsky

Research shows that intuition, idiosyncratic knowledge, and even practical, reasoned judgment are insufficient when making design decisions for a global audience. Instead, we need systematic, evidence-based guidelines to improve user comprehension and increase the likelihood of successful interactions.

The rapid growth of digital technology and worldwide internet proliferation has accelerated efforts to localize and adapt the user interface (UI) of interactive systems and websites to numerous languages and cultures. However, this may not be such a straightforward task, especially for a group of languages that radically differ from the UI’s original language. Such languages not only use different characters, but are also written and read from right to left, rather than from left to right, which is the dominant writing direction on the web. The common term for this group is “right-to-left languages.”

More accurately, though, these languages rely on unique bidirectional (BiDi) writing systems that mix the native right-to-left script with left-to-right strings. (A “string” is a set of characters in the text — usually a word, a phrase, or a sentence.) Left-to-right strings include phrases in Latin script, numbers, and other notations, such as those shown in Figure 1. Speakers of BiDi languages, such as Arabic, Hebrew, Persian, and Urdu, comprise 12 percent of the world population.1 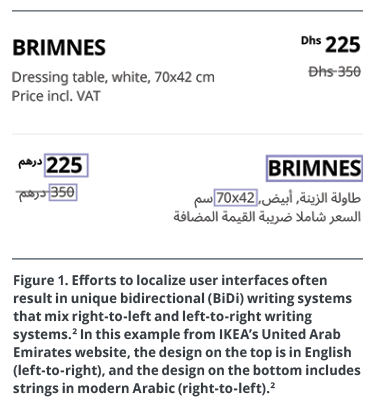 For BiDi languages, the software localization process should include not only translating text into the target language but also determining the direction of interface elements. At first glance, this task does not seem so challenging — why can’t we simply transpose, or mirror, the directionality of the source language? In fact, many designers do just that.

But, in reality, such a seemingly sensible rule may result in designs that are ambiguous or just plain wrong. For example, consider the progress bar, media player buttons, and star rating in Figure 2. Should they be mirrored when presented on a BiDi interface? 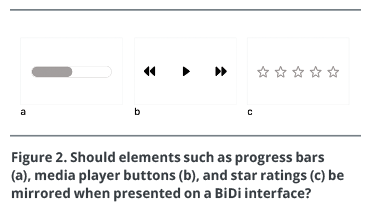 Major software companies have addressed these issues to some extent. Google’s Material Design guidelines provide an elaborate localization scheme that suggests which UI elements should be mirrored and which should not. For example, according to the guidelines, the progress bar should be mirrored, whereas the media player buttons should not. The star rating element? There is no guideline for that.

While many of the guidelines appear reasonable, they are not comprehensive. For example, in a recent study3 we found many UI elements that are not accounted for in existing guidelines. In addition, the localization guidelines do not seem to be based on empirical evidence. In our research, we discovered discrepancies between the current localization guidelines and what Hebrew users actually prefer. For example, Google recommends presenting the localized timeline element (Figure 3) and double slider (Figure 4) as right-to-left, whereas the BiDi users in the study preferred left-to-right. 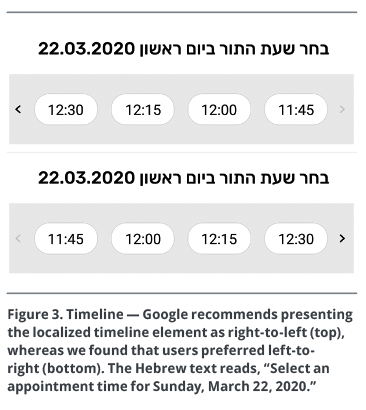 The Complexity of BiDi Design

Rules and conventions for script directionality in BiDi languages vary depending on countries and cultures. For example, the appropriate direction for mathematical notations in Israel (Hebrew) and Morocco (Arabic) is left-to-right, using Latin script. In contrast, in most Middle East Arabic countries, the proper direction is right-to-left, using Arabic script.3

Moreover, we found that users’ preferences are often contingent on various contextual and personal factors. The findings point to the complexity of this seemingly trivial design issue and underline the need for empirical evidence as a basis for designing BiDi user interfaces. 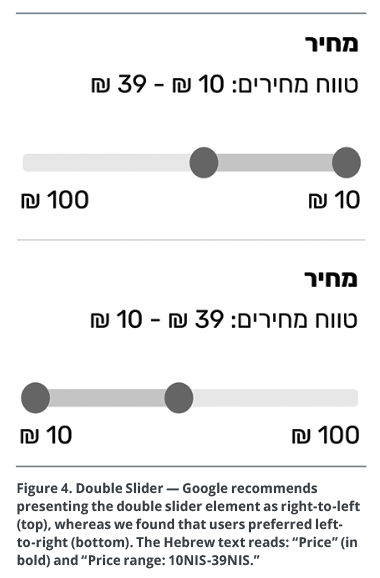 Language, including script directionality, affects cognition. Thus, speakers of BiDi languages may construct certain aspects of the world differently than speakers of left-to-right languages. Moreover, empirical studies studies4,5 have shown that various factors can affect the variations in direction preferences of BiDi speakers. These factors include the BiDi language specifics, context of usage, and the degree to which the users are proficient in left-to-right languages or in the sciences, which require extensive use of left-to-right scripts for programming and for elements such as formulas and charts.

For example, in a psychological study on preferences for the “quantity” (more-less) direction, the majority of Arabic speakers demonstrated right-to-left preference, (with “less” on the right and “more” on the left). In contrast, Hebrew speakers mainly demonstrated left-to-right preference.6

Our study of Hebrew speakers found that users’ backgrounds led to different interpretations of the string “Sale 1+2” (Figure 5), which is used in some European countries to indicate that users will receive a discount after purchasing a certain number of items. Engineering students (who are experienced in left-to-right coding and mathematics) showed a tendency to read this string from left to right (“buy one, get two”). In contrast, ordinary users and UI professionals tended to read this information from right to left (“buy two, get one”). 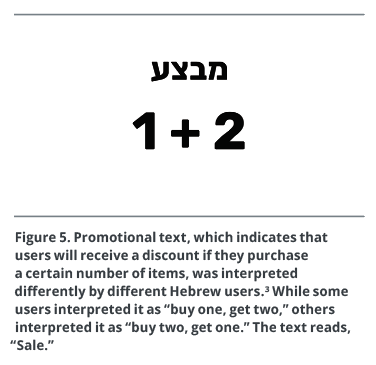 We observed similar differences in how Hebrew speakers interpreted the ambiguous star rating element (Figure 2с). Engineering students tended to interpret the element from left to right (so that the lower rating is on the left), whereas UI professionals showed the opposite tendency.

Given these complexities, how should we address the challenge of BiDi interface design?

Designers of BiDi interfaces currently use three main strategies to determine the direction of a specific UI item. 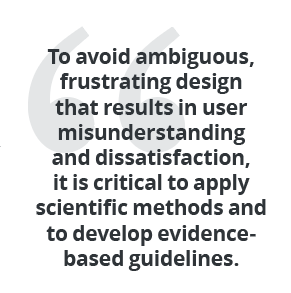 The first approach is the naive approach, which suggests full mirroring of all UI elements under the assumption that right-to-left languages are simply written in the opposite direction from left-to-right languages. We have already hinted at the deficiencies of this approach. For yet another example, consider Figure 6, in which a date selector is presented in Hebrew. This fully mirrored design flipped the original direction of all the elements. In Hebrew, the right UI component, which includes the day and date, can be read from right to left. However, the information in the left component (contained in a red frame) should only be read from left to right in the form hh:mm. 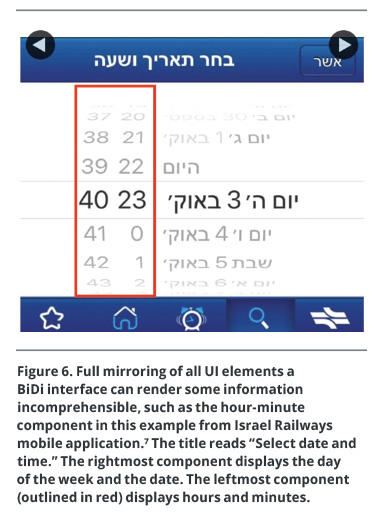 A second approach is to rely on BiDi design guidelines provided by major software companies such as Microsoft, Google, and Apple. However, the use of these guidelines is not supported by evidence, they only cover a portion of UI elements, and they do not provide guidance for the direction or position of many common UI elements, such as star ratings, numerical ratings, vertical scroll bars, paginator and toggle elements, and many more. Our research has also found cases in which tendencies and preferences of BiDi users contradicted existing guidelines (Figures 3 and 4).4,8

Another option is to seek help from native BiDi language speakers, who might be a member of the development team, for example, programmers or product managers. But our research found no guarantee that consulting two different native BiDi speakers will generate the same answer. The reason is that such answers depend on personal knowledge or anecdotal professional experience, including colleagues’ opinions and user feedback from different contexts. Numerous examples with inconsistent direction usage of UI elements in local BiDi interfaces (Figure 7) attest to the shortcomings of this approach.

Given the limitations of existing approaches, it is obvious that intuition, idiosyncratic knowledge, and even practical, reasoned judgment are not enough to determine how BiDi UI elements should be presented. It is also clear that BiDi languages are sufficiently diverse to preclude one-size-fits-all solutions. Furthermore, BiDi users’ preferences are mediated by national, cultural, personal, and various contextual factors. Thus, we argue that the only way forward should rest on systematic efforts to untangle those contingencies and to provide empirical evidence as a basis for design guidelines that genuinely consider the complexity of the BiDi design space.

BiDi languages pose unique, and often idiosyncratic, challenges to designers of interactive systems. Current solutions yield incomplete, inconsistent, and at times even whimsical results. This, in turn, leads to ambiguous, frustrating design, resulting in user misunderstanding and dissatisfaction with the interface. It is therefore critical and urgent to apply scientific methods to address those challenges and to develop evidence-based guidelines for BiDi user interfaces. 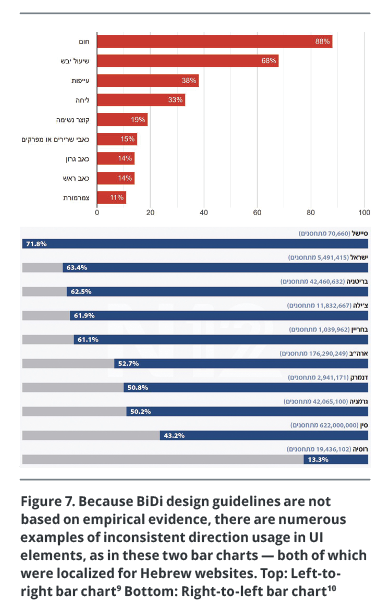 YULIA GOLDENBERG (yuliago@post.bgu.ac.il) is a PhD student in the Department of Software and Information Systems Engineering at Ben-Gurion University of the Negev (Beer Sheva, Israel) and a member of the Standards Institution of Israel. She has vast experience in user experience design for different industry leaders. Her study aims to build a framework to help in defining the optimal direction of User Interface elements in BiDirectional (e.g., Hebrew or Arabic) interfaces. Her work has been featured in CHI-2021 and Israeli Human-Computer Interaction conferences. She is looking forward to research collaborations with industry and academia. You can connect with Yulia on https://www.linkedin.com/in/greyulia/.

NOAM TRACTINSKY (noamt@bgu.ac.il) is a Professor of Software and Information Systems Engineering at Ben-Gurion University of the Negev. He studies various aspects of human-computer interaction, with a special interest in the visual aesthetics of user interfaces. He is currently involved in research on bidirectional user interfaces, remote interpersonal motor synchronization, and social robotics.

Debunking the Myth of Learning Styles: A Case for Evidence-Based Instruction and Communication
Information Visualization: Communicating Clearly, Efficiently, and Without Distractions
Comment 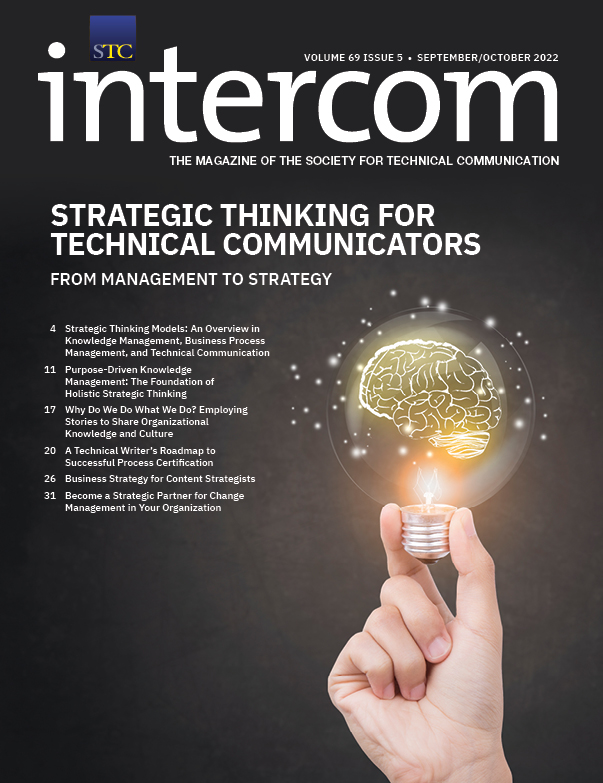