Among scientists, communication is a critical component of individual and corporate success; among laypeople, science communication is the conduit to a society more positioned to make educated, informed decisions. The intersection of these two cultures is a middle ground of concerned citizens who realize there is an increasing gap between the assumptions, general knowledge, and expectations of the two groups. As scientists struggle to publish data, win grant money, and maintain their respect with the public, the rest of us must attempt to run daily lives with some awareness of how science affects our very being: from the energy use in our homes and cars, to the medicines and foods we feed our children, and the choice of how to vote in public elections.

Many of our seemingly mundane, everyday choices and actions are influenced, to a certain degree, by basic science. It becomes more important that people at all educational levels have access to informed, accurate, and honest analyses of data created from scientists of integrity. To this end, three short books were written by authors of varying scientific backgrounds on the same topic: how to think and write about science in a clear, communicable and appealing way for increased funding, efficient collaboration, respect, prestige, and public awareness. 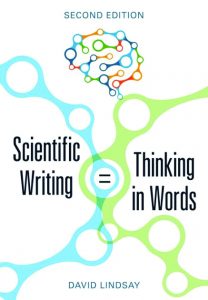 This 166-page book covers every section of a scientific paper in almost excruciating detail, perfect for a beginner. It would also be useful for scientists who are English language learners or for a scientist who was trained before the digital explosion of the last 20 years.

David Lindsay explains in the Preface the need for updates to his 2020 book. Aside from the more global focus resulting from the electronic era, he acknowledges some progress from the mentality of research writing from the Preface in his 2010 edition, “It means that the over-formal and often pretentious style of older writing that made writing challenging for researchers is now more relaxed and less threatening for native and non-native English speakers alike . . . In short, people are recognizing that being understood is far more important than being impressive” (p. vii). Lindsay is a researcher himself, which is abundantly clear as he walks his readers through the process of a scientific paper: from formulating the original hypothesis to submitting it to a journal—this is the first 100 pages of the book. Other important science communication responsibilities of a scientist are in the last section and include oral presentations, posters, literature reviews, theses, and grant proposals. One tiny chapter near the end focuses briefly on science communication for a lay audience.

If a scientist is presenting or submitting research for the first time, Scientific Writing = Thinking In Words would be an excellent springboard from which to launch. 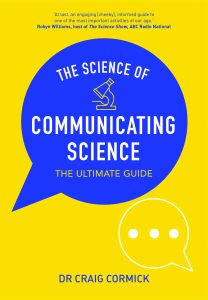 THE SCIENCE OF COMMUNICATING SCIENCE: THE ULTIMATE GUIDE

In contrast to David Lindsay’s approach, Dr. Craig Cormick approaches science writing from the perspective of a journalist. His focus is on communicating science to an increasingly distrustful public who view science from a skeptical glance. Each chapter begins with a pithy quotation from a famous person, movie or book that introduces his main point for that chapter. This is a brilliant strategy to demonstrate a point that weaves its way throughout the entire book: science is part of everything we do.

In his chapter specifically about politics and policy, he starts with a quotation by Maureen O’Neil, former President and CEO of International Development and Research Centre. “In development research, to get a new discovery into policy and practice is just as important as the discovery itself” (p 132). In communicating science, you should gauge the likelihood that your audience will value and respect the data and conclusions you are presenting. Success in conveying a message will largely rely on an understanding and ability to gear that message to the values of a given audience.

Cormick’s focus on metaphors, simple illustrations, storytelling, and use of media is the strategy of how he proposes to win the public to a science perspective. Unfortunately, he assumes that the world of scientists is always correct and does not propose ways of testing that credibility.

Another drawback of his approach is that if you want a quick reference, you must sift through his storytelling and interweaving of topics to get to a main point. For this reason, it is not particularly useful for a beginner. The audience for The Science of Communicating Science: The Ultimate Guide is a rather narrow group of people who already grasp basic science and have at least dabbled in science communication. His own skepticism is slanted toward the public and he omits an examination of the quality of the science when looking at effectiveness of science communication. This book is for you if you are confident of your scientific message and want to learn how to effectively convey it.

THE CRAFT OF SCIENCE WRITING: SELECTIONS FROM THE OPEN NOTEBOOK 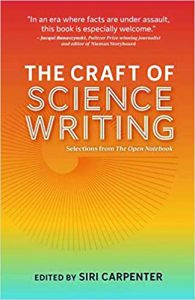 This nearly 300-page book is a compilation of essays, interviews, step-by-step instructions, and other writing tidbits compiled on a web site called “The Open Notebook” founded in 2010 by Siri Carpenter. What developed into an online science writing community started as a web page run by two graduate students interested in transitioning their bench science careers into science writing.

The Craft of Science Writing: Selections from The Open Notebook is divided into five parts: becoming a science journalist, finding science stories, reporting science stories, Storytelling, and building expertise in your subject. Each chapter within a section is written by a specialist explaining their area of expertise. One difference between this book and other books geared toward science advocacy/lobbying is that amongst the storytelling and appeal of science journalism, this community holds a healthy skepticism toward scientists themselves.

Three chapters of the nearly 40-chapter book cover topics specifically related to making sure the science being reported is sound science. “How to Read a Scientific Paper,” “What are the Odds,” and “Spotting Shady Statistics” allude to the idea that before reporting a new study it is important to examine the science and even read the published paper. Sometimes the scientists themselves are at fault in disseminating poor information—whether in just faulty analyses and conclusions or even, in some cases, shady and dishonest results.

In the end, The Craft of Science Writing reads like a guest-artist feature in every aspect of science journalism. This book would be an excellent addition to a graduate program in any science subject or even a small-group journal club for undergraduates. 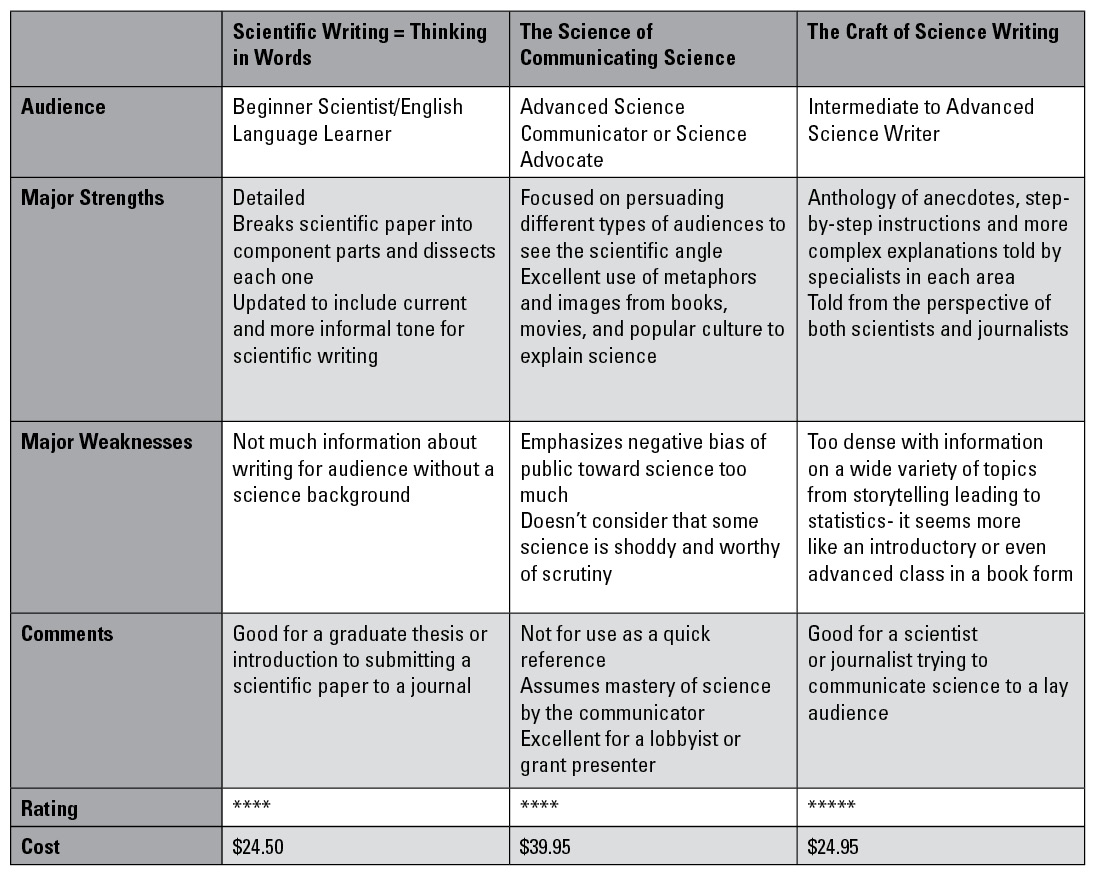 What is on the Traditional Herbal Medicine Label? Technical Communication and Patient Safety in Ghana 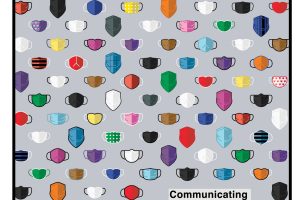