Join Scott Abel, The Content Wrangler, as your March host for a peek at the future of technical communication from the eyes of experts and practitioners alike. During the four weeks of March, as part of the Society for Technical Communication’s Roundtable program, Scott will curate and present a variety of information designed to help demystify the future of our discipline.

KEEPING DOCS CURRENT AND ACCURATE IN A CONTINUOUS DELIVERY ENVIRONMENT

Week one of the Excaliber RoundTable kicks off with a special one-hour webinar case study entitled, “Keeping Docs Current and Accurate in a Continuous Delivery Environment” with guest presenter and technical writer Meredith Volk of Sailpoint, an identity governance software manufacturer.

THE STATE OF TECHNICAL COMMUNICATION

Each year, The Content Wrangler surveys technical writers around the globe to identify the top issues impacting the creation, management, translation, and delivery of technical content.

Week 2 of STC Roundtable brings us The Content Wrangler’s 2019 benchmarking report that look at the trends, challenges, methods, standards, tools, and technologies in use in modern technical communication departments. The findings should prove useful to practitioners, managers, vendors, educators, students, and employers.

A facilitated discussion with technical communication thought leaders and practitioners about the future of the discipline. Panelists include Marta Rauch, Alan J. Porter, Mark Lewis, and Jeremy Lowell and Moderator Scott Abel.

THE FUTURE OF TECHCOMM

See what the experts have to say about the future of tech comm in this week's content. Practitioners across industries and geographic areas discuss the skills they think technical communicators need to stay relevant in the tech comm world going forward. Watch the video and see what they have to say.

Join our community for the top technical communication content.

Did this month’s theme spark questions? Are you interested in learning more? This is the forum to ask questions and discuss your experiences, challenges, and insights related to the monthly topic.

Do you have questions about technical communication? Use this forum to connect with other Roundtable members or curators to ask and answer your questions.

Do you have questions about Roundtable, or are you experiencing technical challenges? Use this forum to ask and get answer to questions.

Week one of the March Roundtable kicks off with a special one-hour webinar case study entitled, “Future-Proof Your Doc: Keeping Docs Accurate with Continuous Delivery ”, with guest presenter and technical writer Meredith Volk of Sailpoint, an identity governance software manufacturer.

In week two, Scott is providing “The State of Technical Communication,” a summary of the results obtained during The Content Wrangler’s Technical Communication Industry Benchmarking Survey, an annual audit of technical communication practitioners. The survey looks at the trends, tools, standards, and technologies in use in modern technical publications departments today. The findings should prove useful to practitioners, managers, vendors, educators, students, and employers. Come back to the Roundtable site during week 2 to access the report.

In week three, Scott will host an online panel discussion amongst technical communication experts, practitioners, and service providers. He’ll focus the discussion on the future of the discipline and our place in it, on Wednesday, March 20th from 12:00-1:30 PM EST. Discussion will include the rapidly changing technology landscape and its likely impact—positive and negative—that those transformational changes may introduce.

For week four, it’s your turn to be in the spotlight! Scott is inviting you to be his  guest on an internet television interview show. Should you accept the challenge, you’ll create (with the help of a camera-equipped smartphone) a short answer to the question, “What does the future of technical communication look like to you?” Scott will then stitch your answers together and produce a video that he’ll share with you and the members of the Society. Come back to the Roundtable site during week 4 to learn how to participate in this fun activity. 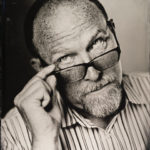 Known affectionately as “The Content Wrangler,” Scott Abel is an internationally recognized intelligent content strategist and cognitive computing evangelist who specializes in helping organizations deliver the right content to the right audience, anywhere, anytime, on any device. He is the co-author of Intelligent Content: A Primer and The Language of Content Strategy (XML Press). Scott is the founder, CEO, and chief strategist at The Content Wrangler, Inc. He co-produces Information Development World Conferences, produces a popular series of content strategy books, and is the host of the San Francisco Content Strategy Content Marketing Professionals Meetup. Scott is also a highly sought-after keynote presenter, moderator, and a frequent contributor to content industry publications. He manages one of the most widely-viewed webinar channels on the BrightTALK network, producing over 100 content-focused webinars a year.

In 2016, Brand Quarterly Magazine ranked Scott as one of the 50 most influential marketing thought leaders. Scott hosts one of the most popular content-focused webinar shows on BrightTALK, attracting tens of thousands of viewers annually. Scott co-produces several events including the Information Development World Conference. Scott is a popular at content industry conferences including STC’s Technical Communication Summit.

Soctt’s blog, TheContentWrangler.com, is a popular destination for communication pros seeking information about content management strategy and related topics. Scott’s social networking group on Linkedin, The Content Wrangler Community, is a global network of content professionals that attracts tens of thousands of members from around the world. He also has a large following on Facebook and Twitter.